Bhuj has many such monuments which will take you back in time when you view them. However none has the exotic appeal of the Sharad Baug Palace. Rarely discussed in the tourist circles because of lack of appropriate publicity the Sharad Baug Mahal is a splendid piece of work that reflects a fusion of the Indian and the Italian style of architecture. 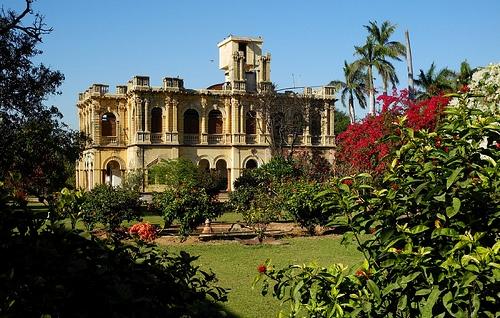 Post the demise of the flamboyant Maharao Madansinhiji Jadeja, his residence was converted into a museum and it is now famous as the Sharad Baug Museum. If you get a chance to visit Bhuj don’t miss out on Sharad Baug.

The dynasties of Maharaos of Bhuj were all great patrons of arts. The last Maharao of the Kutch dynasty was Madansinhji Jadeja who was an avid golfer and tennis player. The last half of his life was spent in democratic India and he remained Maharaja in name only. Madansinhji Jadeja spent the last years of his life in UK before passing away in 1991. His palace was however scrupulously maintained by his entourage and staff. 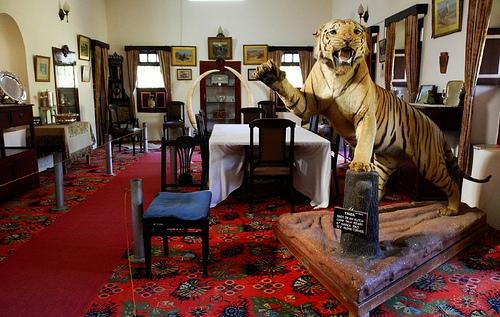 Madansinhji Jadeja had accumulated many collectibles throughout his life like rare artifacts, paintings from India and abroad, statues, handicrafts of Kutch, fine carpets etc. there is also a collection of weapons like spear, swords which the Jadeja warriors used to use in the battlefield. The palace also contains furs, hides and hunting/ sports trophies accumulated by the royal family. The personal memorabilia of Madansinhji Jadeja also contains a lot of interesting objects.

Structure of the Sharad Baug Palace

Though the palace of Sharad Baug is set in sprawling green grounds the actual building is of very modest proportions. The sitting room, living room and bedroom occupy maximum space in the palace while the dining room is in another building. All these rooms bear interesting artifacts and objects which the royal family used to use in their daily life. The furniture design has an Italian influence while the tapestry on the walls is purely Indian. 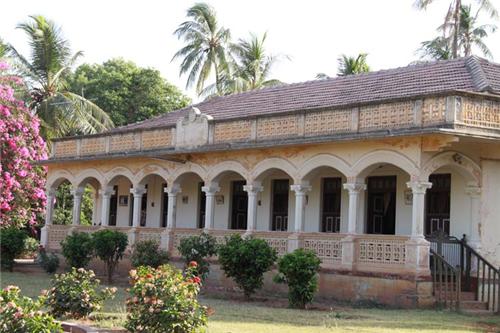 The body of Madansinhji Jadeja was flown in from UK to India in a personalized coffin. The same coffin is still displayed in the palace which has now been converted into a museum.

As mentioned earlier the Maharao of Kutch was an avid tennis player who had won many trophies for his marvelous performance in interstate tournaments. Naturally the Sharad Baug palace has a beautifully manicured tennis lawn and several grass courts which is well maintained even today. Leading tennis players of the day were invited for tournaments here. There is a big garden surrounding the palace which is now been converted into a nursery. In fact the Sharad Baug nursery is now the biggest nursery in Bhuj. 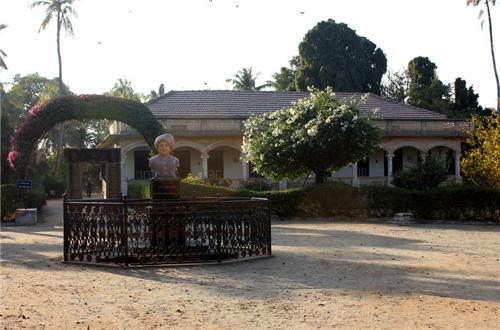 Tourists and the townsfolk of Bhuj frequently visit the Sharad Baug palace nursery to buy seedlings, saplings and potted plants and flowers. There are paths winding around the nurseries which are overlaid with luxuriant palm trees and blooming Hibiscus shrubs. Gujarat is home to many migrant birds and many of them find a home in the nursery besides the Sharad Baug palace. It’s a really enjoyable experience to take a walk through the narrow paths of the nursery.