Places to Visit in Bhuj

Bhuj as a town was shielded away from the rest of the world for centuries. The attractions of Bhuj have thus come into the limelight quite recently but have managed to captivate the minds and hearts of tourists all over India and the world in a very short span of time. Here is a comprehensive list of places you should visit in Bhuj if you go there.

Places for Village Lovers in Bhuj

Bhujodi is a must visit place for you if you are interested in handicrafts, handlooms, pottery and textiles that are unique to the Rann of Kutch. You can take an autorikshaw from the stand of Bhuj and reach Bhujodi in half an hour. About 1200 people belonging to the Vankar community stay in Bhujodi and most of them earn their livelihood through production and sale of handicrafts. 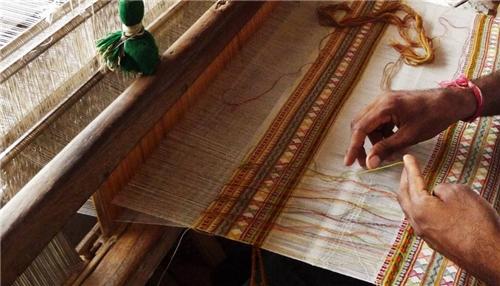 About 16 different styles of embroidery are practiced by the villagers apart from block printing, mirror work, tye and dye techniques. You will get beautifully embroidered and designed textiles for low prices in Bhujodi. The Hiralaxmi National Crafts Park is also a major attraction here.

A travel from the Northen climes of Gujarat to the capital town of Bhuj can never be complete without a stopover at the picturesque village of Khavda. There is a lot to see in Khavda if you are interested in the unique living style of villagers who belong to the Rann of Kutch. Leatherwork by Muslim inhabitants here is very famous and you will get excellent mojris, purses and belts here. The Hindu Meghwal community is engaged in woodwork which is also famous in its own right. Pottery from Khavda village is exported to various parts of India. But the principal attraction of Khavda is half a million flamingoes that stop over at the Jamkuduliya Lake in Khavda for their annual migratory trip.

Follow the Mundra road that originates from the south of Bhuj and within 40 minutes you will reach the magnificent ruins of Kera. Legend has it that Kapilmuni used to reside at Kera and that is why it is still known as Kapilgram. Inside Kera besides the river Nagmati is a fort built by warrior Lakho Fulani and this fort is now known as Kera fort. 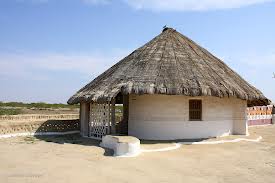 The Shivalaya which belonged historically to Lakeshwar was again resurrected at Kera. The structures at Kera have been heavily damaged by the earthquakes and are now undergoing restorative work. Beautiful structures are still found hidden in the ruins of Kera.

Dhamadhka is the best place to visit if you want to single out one village from the cluster of amazing craft villages surrounding Bhuj. The art of weaving and block printing has been elevated to a new level in Dhamadhka. Taking in all the experiences that Dhamadhka has to offer will at least take up half a day so make sure you arrive with time on your hand.

Dhamadhka is primarily famous for the Ajrakh printing process that takes 16 laborious steps before the final beautiful piece of cloth is created. Stoles, shawls, durries, kurtis and rolls of Ajrakh printed textiles are found in Dhamadhka.

Places for History Lovers in Bhuj

Chattris are the Gujarati term for “umbrella” and this case the Chattri belongs to the valiant Maharao Lakhpatji who is credited for being a great patron of arts and of the famous members of the Maharao clan. There are twin chattris of polygonal shape and exquisite design constructed on the banks of Hamirsar Lake. There are two galleries each with two entrances and several pillars which are adorned with stone cut work. The Maharao had a harem of 15 wives all of whom committed sati after he died. All the images are still preserved in form of stone statues and paintings in the Chattri of Maharao Lakhpatji. Incidentally the Chattri is supposed to provide shelter to the dead. Gujarat 2001 earthquake had caused considerable damage to the beautiful structure. 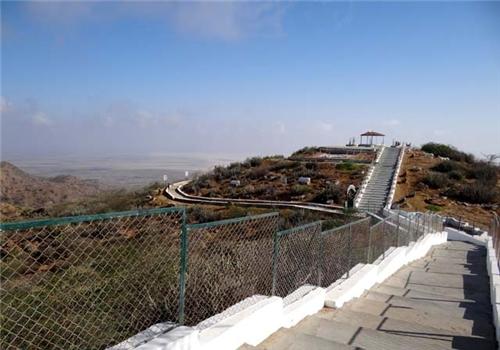 The stepwell of Ramkund is rumored to have hosted the lotus feet of the Hindu God Shri Ramchandra. This is a squarish well with each side measuring about 56 feet. The walls of this well are covered with carvings inspired from Ramayana. There are images and exquisite carvings of Lord Rama, Sita, Lakshman and Hanuman on the walls. All the incarnations of Vishnu are also carved here. As you approach the bottom of the well by climbing down the stairs you will experience a serenity and peace that is rare to find in today’s hectic world. The Ram Dhun temple is located bang opposite the step well of Ram Kund.

Places for Nature Lovers in Bhuj

The Rann of Kutch is home to an unusual array of flora and fauna. The Narayan Sarovar Sanctuary is one of the major ecological conserves around Bhuj. The Gujarat government owns, operates and promotes this sanctuary and it is alternatively known as the Chinkara Sanctuary because of the profusion of Chinkara deers living there. The total area of the conserve is 444 square km and it is run over by vegetation, thorn plants, cacti, babul, gorad and scrubs. During the monsoon a wetland forms in this area.

The Hanging Garden is one of the major tourist places in Bhuj. It’s about 3 km from the main town of Bhuj and you can easily take an auto to reach there. There are 22 acres of lush green land in the Hanging Garden and it makes for a sharp contrast against the dry arid landscape of Bhuj. An enormous skeleton of a dead Blue Whale (85 feet) is kept in the hanging garden and this draws hordes of visitors. There is a children’s park with various kinds of games and rides to keep kids entertained. There is also a cactus nursery which hosts 550 different kinds of cacti. The Hanging garden is near Aina Mahal and Prag Mahal of Bhuj.

Hamirsar Lake is the ideal destination for a family outing should you ever plan to visit Bhuj. A network of several tunnels and various canals were interlinked together to form the Hamirsar Lake which now pumps water into the aquifers of Bhuj town. The lake is huge spread over an area of 28 acres with a picturesque artificially created garden at the center. Swimming, feeding ducks and swans, boating are just some of the activities that tourists who visit Hamirsar Lake indulge in. The Swaminarayan temple and the Aina Mahal are faintly visible from the banks of the Hamirsar Lake. This lake is also a perfect destination for photography.

Chari Dhand is a wetland which is only flooded at the time when monsoon visits the Rann of Kutch. At all other times the Chari Dandh is a white sparkling expanse of a salt desert spread over an area of about 8 km. It will take you at least 2 hours by car to reach Chari Dhandh from the South West corner of Bhuj. 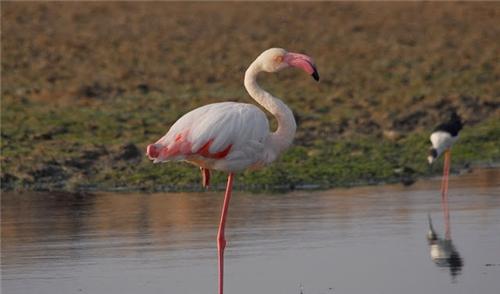 This is actually a protected reserve forest area where about 150 different types of birds reside besides exotic flamingoes which make the Chari Dhandh their temporary home on their international migratory trip. Bird watchers, travelers and photography enthusiasts will find Chari Dhandh a treat for their eyes.

A mere 14 km from the town of Bhuj is the Khari River which was worshipped by the famous Jadeja warriors of the Rann of Kutch. Right on the banks of this river is the Rudra Mata Mandir the Jadeja goddess and the Garha Lodge which is a theme accommodation option. This lodge has rooms in forms of traditional mud Bhoongas.

Bhuj actually derived its name from the Bhujiya hills which stood on the southern part of the town. The Jadeja warriors of the Rann of Kutch built a temple dedicated to their presiding deity Nagmata and the Bhujiya Hill Fort was built here. The view from the top of the Bhujiya hills is very nice as the entire town can be glimpsed from there. The Bhujiya hills and Hamirsar Lake surround Bhuj town from both sides.