The Vegetable Market  or Saraf/Shroff Bazaar is an important destination of Bhuj. Several tourists visit the Bhuj Vegetable Market  to capture its beauty and feel its unique charm. In fact most guided tours of Bhuj will include a stop in the famous Vegetable Market  as you can get almost everything under the sun here. 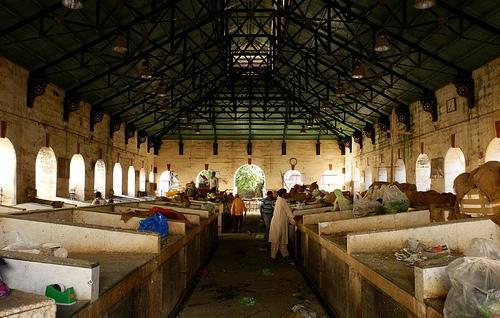 History of Vegetable Market of Bhuj

In the pre impendence era a garrison was built in Bhuj under the rule of the British. This garrison is a colonial structure. The year 1883 marked the time till when the Garrison was active after which it was abandoned for a period of many years. Post independence this area was declared to be a commercial building and soon became the destination for several vegetable vendors and shopkeepers. What remains now is a winding colonial structure which hosts scores of vegetable sellers, fruit sellers, spice vendors and charming little eateries. This is one of the few areas of Bhuj where fish is sold openly albeit in a separately guarded enclosed section. As you must know, Bhuj is primarily a vegetarian city and you will not see meat or butchers shop in the market area. This is also why unlike other Vegetable Markets in India there is no overpowering stench of meat, blood and entrails of animals.

Sections of the Vegetable Market in Bhuj

The market has mainly three sections; one is the clothes section and food and jewelry sections are the other two. There are other different sections in the Vegetable Market  of Bhuj which is called the Shroff Bazaar. Though vegetable sellers comprise of at least 60% of the vendors there are different sections for grocery, spices, fruits and snacks. 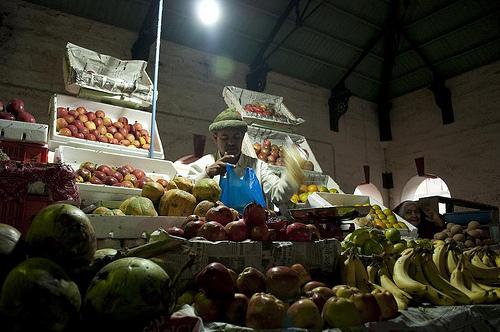 The vegetable and fruits section of the market will greet you just when you step foot inside the Saraf Bazaar. Apart from every vegetable under the sun you will also see sellers displaying lentils, whole grain, sugar and jaggery in heaps.

Spice sellers occupy a large portion of the Vegetable Market  and they sell a wide variety of spice like red chili, turmeric, mustard, thyme, fenugreek, saffron, jeer, sesame seeds etc. apart from spices there are different stalls selling varieties of jiggery. Gujaratis have a sweet tooth and they have the habit of chewing jaggery after almost every meal. Buttermilk, groundnut, coconut and lime juice in containers are also sold in the Vegetable Market . If you examine the Kutch cuisine then you will find that these ingredients are a vital part of everyday food.

There is a section in the Vegetable Market  which sells pickles. The average Bhuj resident cannot do without his share of pickles. Athanu (sour), goondas (spicy) and chanduo (sweet) pickles are available in a lot of shops in Vegetable Market  or Saraf Bazaar. Papads (another integral part of Kutch cuisine) is also available in dry form in the stalls.

Snacks/ Nasto/ Farsan are sold in the Saraf Bazaar of Bhuj. There are snacks which are made up of besan, flour and maida. The chewda is a special Gujarati snack which is widely sold here. This is constituted out of beaten rice that is deep fried till it reaches a crisp consistency. Deep fried kachoris, bhajias; soft dhoklas are also available in several stalls. Khandvi, dabeli and arvi-na patra are some other items which you can munch on if you happen to visit the snacks section of the Bhuj Saraf Bazaar. 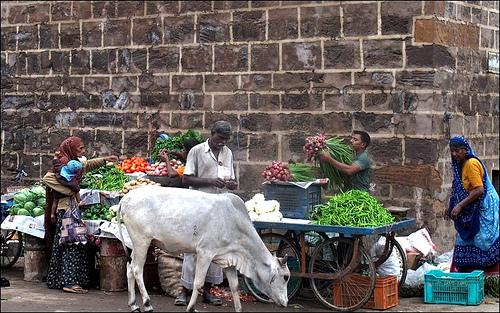 Nearby Places to See around Vegetable Market

While you visit the famous Saraf Bazar in Bhuj do not miss the two very popular monuments in Bhuj. The monuments those are 3-4 block away from Saraf Bazaar are the Prag Mahal and Aina Mahal. The Saraf Bazaar is also connected to the Silver market of Bhuj by a narrow by-lane.

Saraf Bazaar is located at Old Dhatia Falia in Bhuj. It’s just a mere 4 minutes travel from the main city of Bhuj.