Bhuj is surrounded by a cluster of nomadic villages like Dhamadka, Bhujodi, Kera etc which are the homes of tribes. These tribes used to roam across the Rann of Kutch and passed their time by singing, dancing and passing their time by making exquisite handicrafts. 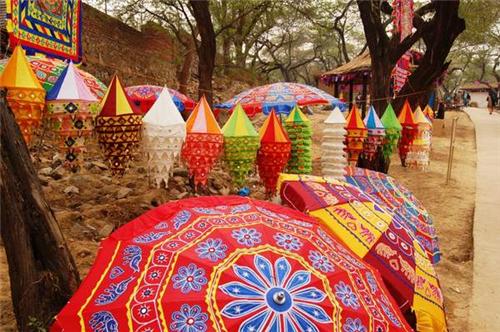 It’s amazing to see the range of handicrafts now found in Bhuj but majorly it is the contribution of these tribes who make these handicrafts which are later brought inside the city. If you happen to visit Bhuj and want to explore the different kinds of handicrafts found there then make sure that you try out the following options.

Most Guajarati women are very good at needlework especially those who belong to the lower socio economic groups. The husbands of these women were mostly herdsmen and farmers and the women honed their needlework skills so that they could bring in some extra money into the house by selling their wares.
Ari Bharat appliqué work is a specialty of Bhuj as it is filled with colorful threadwork, mirror work and little silver bells are hung to produce the sound effect. Traditional Rajputana and Gujarati motifs are used to make these appliqués. 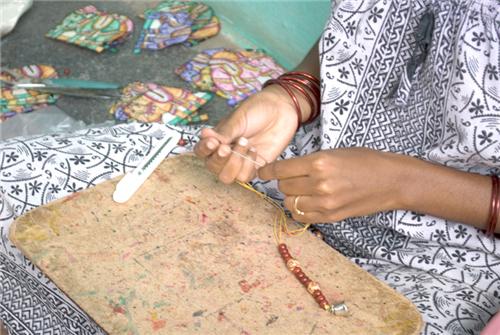 Torans are the embroidered decorations that are hung over doorways. They have hanging flaps made with brightly colored cloth. The Toran is supposed to bring in good luck inside the home and it also acts as a traditional welcome sign for visitors. Pachhipatis are also embroidered frieze which looks like colorful trailing vines that hang from the corners of the room. They are the specialty of Gujarati homes. Chaklas are square pieces of cloth which have embroidery and mirror work. They are used as furniture covers. Bhitiya is a traditional Bhuj wall hanging with appliqué and mirror work while Ababa is a decorative piece made a dazzling combination of mirrors. The motifs used in needlework of Bhuj are inspired by daily life, animals, birds, flowers and local customs.

You cannot return from a visit to Bhuj without purchasing the colorful Bandhni Dupattas that flood the local markets. Bandhni is now one of the most popular forms of handiwork in India but it is essentially the original craft of Gujarat. Bandhni is also known as tie and dye and Jamnagar, Bhuj and Mandvi are the three centers of Bandhni production in India.

Bandhni embroidered saris or Gharchola, zari enhanced Bandhni or Bandhej and Bandhni on muslin cloth with gold checks or Jamdani are the top things to check out.

Beadwork items are another specialty of Bhuj. In this art form different motifs and intricate patterns are created by joining 3-4 beads together. Beadwork is used to make wall decorations, clothes, decorative showpieces, potholders and ornate jewelry. The Kathi tribe are the main proponents of beadwork. This work is done against a white background and is achieved by using colors that are flamboyant with intricate patterns.

Bhuj is the original producer of chunky silver and white metal jewelry. The Saraf Bazaar of Bhuj has lines and lines of silversmiths that make intricate silver bajubandhs, kamarbandhs, necklaces, wristlets, rings and earrings. Silver jewelry is exported from here to the rest of India and abroad. 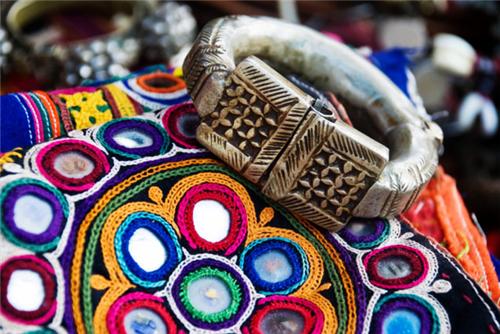 In Bhuj it’s a tradition to wear jewelry as this signifies wealth, power and class. Silver and gold jewelry is worn by members of the upper castes while lower classes use brass and white metal jewelry as substitutes.

Patola saris are famous all over India for their flamboyant designs and exquisite patterns. The weavers of these saris use tie and dye technique to create geometrical patterns which are strikingly lovely. Interestingly, both sides of the fabric are designed in the same tie and dye method.

Bedcovers and Dhurries in Bhuj

A colorful dhurrie or a floor cover from Bhuj can light up the appearance of your whole home. Dhurries are made of multi colored threads, rags and spools of cloth. Kutch women were known to use leftover scraps of clothes to come up with these dhurries that were amazing examples of artwork. Bedcovers too are made of dye art, block prints, mirror work and threadwork designs. Bedcovers with appliqué designs on them are also found in Bhuj. 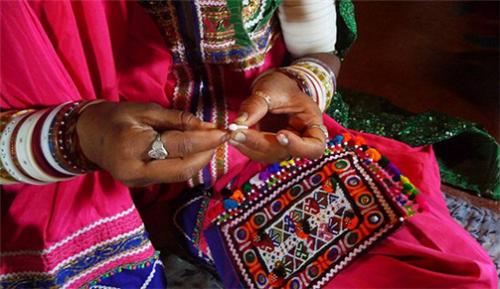 A type of traditional floor spread which acts like a lighter version of a carpet is available in Bhuj. This is also called a Namda and it has camel or goat hair woven into it. wool or cotton is also used alternatively to make these furnishings.

Pottery items are an integral part of all towns of Gujarat but in Bhuj pottery has been developed into an elevated art form. Entire shops, handicraft centers etc are devoted to selling pottery items. Terracotta toys and mud work wall art are the other specialties of Bhuj tribes. You will get pots, jugs, handis, figurines, statues, plaques and garden art in Bhuj.

Textiles in Bhuj are famous as they have a lot of variety. Starting from block printing to tie and dye techniques to Kalamkari and Ajrakh work there is a lot of variety in textiles. You will find mirror work and embroidered cholis, salwar kameez and ghaghra made by the local artists in Bhuj. The motifs used are usually based on geometrical patterns, animals and flowers. You will also find textiles with zari and Patola work in Bhuj
Embroidery styles of Bhuj include Chalakk, Kangari, Salama and Tiki which are done using silver threads, gold and colorful threads etc. Zari is used in weaving, lacework and embroidery on a variety of different textiles.

There are more than hundred handicraft centers in Bhuj but here are the names and locations of the major ones.

Explore more about Culture of Bhuj