In Anjar Taluka in the Rann of Kutch lies a simple non descript village called Dhamadka. It is roughly 34 km from the historic town of Bhuj and each year hordes of tourists visit this village for witnessing the famous block printing process of Ajrakh and buying handloom textiles. 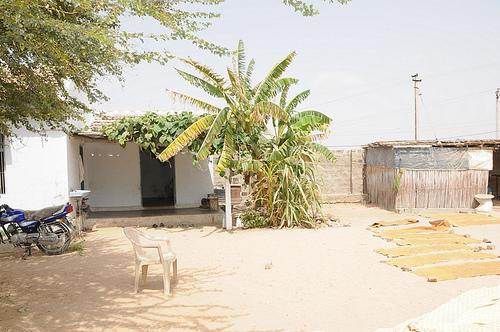 Dhamadka is one of the prominent artisan villages which are clustered near Bhuj. Several mentions of Dhamadka have been made in travelogues, books and articles because of its unique history and tradition of producing some of the finest handlooms in India.

400 years ago, a group of Muslim Khatris (artists who put color on pieces of cloth) came travelling to Dhamadka and settled there. They then began practicing their trade i.e. Ajrakh block printing in Dhamadka. The uniquely created blocks of color placed symmetrically on cloth and soon Dhamadka came to be known as a handloom and textile center. Unfortunately in 2001, a big earthquake shattered Gujarat and had a severe effect on the artisan community of Dhamadka. The Khatri’s however were agglutinated after this episode and subsequently a group of them moved to Ajrakhpur. 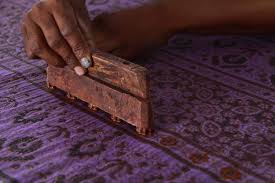 The moment you enter Dhamadka it will be obvious to you that the entire village participates in the process of block printing at some level. Green, pink and mustard yellow fabric rolls will cover the arid landscape and the Ghats (washing places) will be full of men washing clothes.

Local lore is full of stories about Ajrakh. There was a raja who wanted to see a new bed sheet on his bed every day. One day when the servant came to change the bed sheet he was suddenly struck by the beauty of his present sheet and said “aaj rakh”. The bed sheet in question was made of Ajrakh block prints on cotton and this is how the name stuck. Another story goes that the cloth of Ajrakh derived its name from the Arabic name of the plant Indigo i.e. Azrakh. The Indigo plant thrived in the arid landscape of Kutch and became the favorite color for the Khatri community. The oldest Ajrakh prints used Indigo, Madder Black and White to create complicated Islamic patterns of jali motifs, arches and floral trellises along with moons and stars. 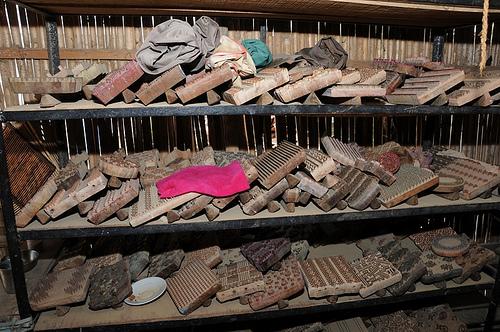 Ajrakh block painting uses 100% biodegradable and natural dyes such as henna, alizarine, rubab, turmeric, indigo, herbs etc and blocks are hammered on the cloth to make patterns on it. 16 steps are required to produce an authentic Ajrakh print and the process is long and complicated. There is an Ajrakh school of art called Kala Raksha Vidyalaya where rural artists sharpen their knowledge about making their designs and selling them. Small boys in Dhamadka learn about this art from their fathers when they pass out of school. 99% of the revenue of Dhamadka is earned by selling Ajrakh block prints and vast quantities of Ajrakh textiles are exported all across the globe.

The Future Prospect of Dhamadka Village

The Khatris who are the dominant community in Ajrakh face a promising future now because of the rising fascination of the Global textile community and International citizens towards fabrics coming from the heartland of India. Hand crafted textiles continue to be marketed at high rates by the simple villagers living in Dhamadka. However Dhamadka faces a water crisis now as the iron content has increased in the water bodies nearby. The nearby river Saran has also dried up. Hopefully the Government efforts to restore water supply to this artisan village will soon bear fruit.

How to Reach Dhamadka Village

The best way to reach the artisan village of Dhamadka is to go by car from Bhuj. It’s also possible to go on a camel ride to Dhamadka though the journey will be uncomfortable in summer months.