Bhuj in One Day

The best thing about covering Bhuj in one day is that you can roam around the city on foot and cover it. Most destinations you are going to see will be closely spaced to each other. If you want a more comfortable journey then take a car or an auto rickshaw. 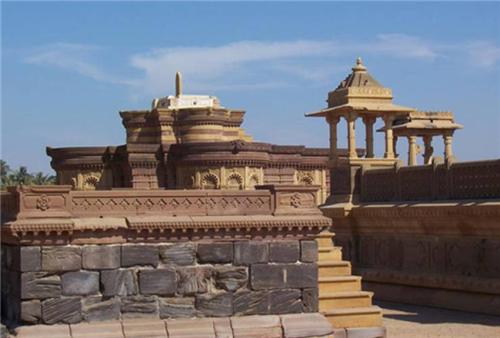 Itinerary for Bhuj in One Day

You have a long day ahead of you so make sure your stomach is filled with a hearty breakfast so that you can enjoy the marvels of Bhuj better. There are many breakfast places in Bhuj which serve sumptuous vegetarian food. You can have alu parantha with curd or a crispy dosa with spicy hot sambhar in Annapoorna near the bus stand. 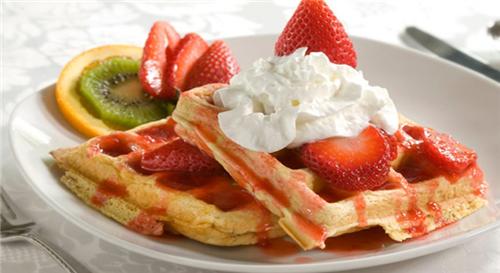 Finish off your breakfast with a strong cup of filter coffee or masala chai. If you are the type who cannot do without eggs at breakfast time then go to the omelet center where you will get everything from masala omelet to cheese omelet to poached eggs. Make sure your breakfast is done by 9 o clock maximum because you have a lot of destinations to cover.

Stroll along to the Aina Mahal in Bhuj which is one of the principal attractions. Make sure you arrive by 9.30 so that you avoid the tourist rush and are able to explore the palace in peace. This palace was constructed in European style by Ramsinh Malan who learnt the art of architecture in Europe. Consequently the palace reflects an intricate blend of European and Indian architecture. 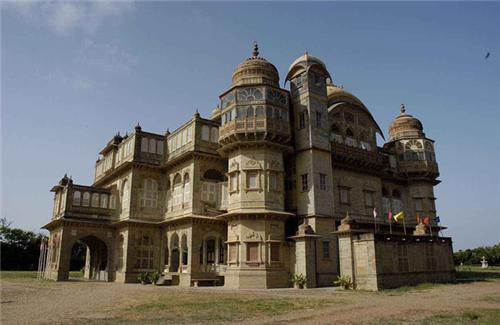 This 2500 square feet palace is a marvel in itself but do not miss out the hall of mirrors which has thousands of mirrors attached o the walls along with gold gilding and ornaments. There is a huge candelabra which is filled which hangs from the ceiling the principal sources of lighting are colorful Venetian glass installed in the hall. Click here to know more.

If you are a Hindi movie buff then you must have already caught glimpses of Prag Mahal in “Lagaan” or “Hum Dil De Chuke Sanam”. But nothing will prepare you for the Italian beauty of the palace. The Mahal is in sharp contrast to the rest of the city of Bhuj which is so fiercely Indian. It took 12 years and crores of rupees for construction of this beautiful palace and Khengarji III actually took on the task of getting it completed.
If you are interested in Taxidermy then check out the main hall of Prag Mahal as it is filled with huge lists of taxonomy of royal family. The Durbar Hall has all items of entertainment used by Maharao and the pillars there are one of the finest examples of Italian architecture in India.

After this its time for a visit to Gujarat’s oldest and biggest museum; the Kachchh Museum. Unlike other Indian museums this is created in the Gothic style. In spite of its unusual and foreign structure it contains the rarest specimens of history of Kutch. There are different 11 sections like handicraft, archeology, shipping, music, painting, tribal culture and literature etc. 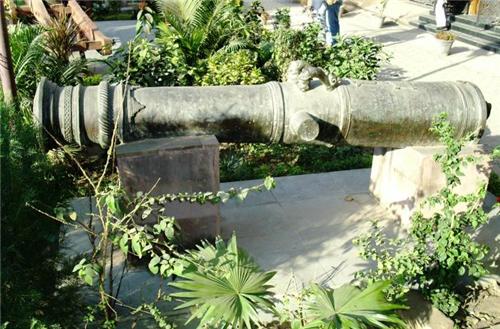 Don’t forget to see 1st and 3rd century inscriptions on stone kept in museum and the vast collection of seals. Airavat or white stuffed elephant which is one of the rarest mammals on earth is kept downstairs and so are models of flamingo and wild ass. Also check out old and extinct instruments like Dilruba etc kept in the musical section. Click here to know more.

The Sharad Baug Palace is a tribute to the last monarch of Kutch who passed away in 1991 in UK the Gujarat government has converted his palace Sharad Baug to a museum now where tourists can come and visit the glorious life that the Maharao clan lived. Unlike the other Museums this one gives away a feeling of intimacy as one can examine the personal belongings of Maharao from very close quarters. Don’t forget to inspect the grand 8 poster bed of Maharao and his tennis awards. His coffin is also displayed in the palace premises. The gardens of Sharad Baug and the fountains there are very beautiful.

Chhatardis are stone umbrellas constructed to keep a watch over and provide shade to the royal dead. The prominent Chattardis of Bhuj are Desar Ji, Lakhpat Ji and Raydbanji.  However if you are pressed for time you can only concentrate on the Cenotaph of Maharao Lakhpatji. About 30 minutes away from the Kutch museum is the Royal Chhatardis of Maharao Lakhpat Singh Ji the most flamboyant ruler of the Maharao clan. 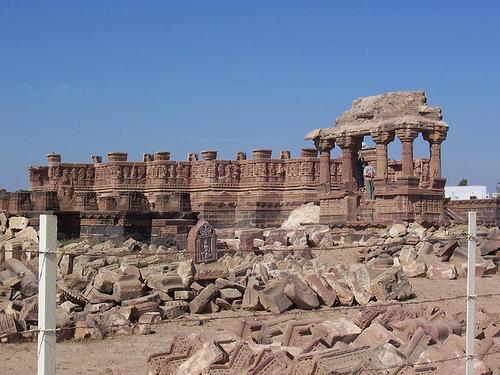 The walls of the Royal Chhatardis are covered with intricate paintings that revealed a lot about the things that happened in the life of the royals. There are stone carvings that denote processions, royal durbar proceedings and hunting. The Lakhpat Ji Chhatardi has idols of him and his 15 wives who committed Sati after he died.

After all the wonderful places you have seen you must be hungry. The specialty of Bhuj is its Kutchi cuisine. So you can try having items like Lahsuni Parantha, tamatar sev, dahiwale aaloo and Bhindi lhahsuniya. You can try out Sajhanand which serves excellent Kutchi cuisine and local fare. If you fancy Dhaba food then visit Jantaghar to sample the famous Gujarati thali which has 10-15 items on it. Don’t take too long to have lunch as you have other great places to visit.

After all the palaces and beautiful monuments that you have seen it is time for a visit to the peaceful Swaminarayan temple in Bhuj. This temple was established by His Holiness Swaminarayan Ji and has only Italian marble and gilded gold used in its construction. Like all other Swaminarayan temples there is a central shrine which is huge with concentric paths running around it. There are Vaishnavi motifs engraved inside the temple.

Don’t forget to visit the ancillary structures of the temple like Sabha Mandap, Bhojan Hall, Ladies temple, Sant Nivas etc. There is a throne made up pure gold in the Swaminarayan temple while the Radha Krishna, Hanuman, Ganpati Ji and Hari Krishna Maharaj idols are all inlaid with gold and offset with precious or semi precious stones

You must be tired after all this hectic activity so now its time to cool off by visiting the tranquil Hamirsar Lake. This lake was established by the first Jadeja ruler Rao Khengarji ii who wanted to build an oasis of peace amidst the bustling desert of Rann. Water from 3 tributaries is used to pump water into the Hamirsar Lake and it’s responsible for pumping water into the actuaries of Bhuj. 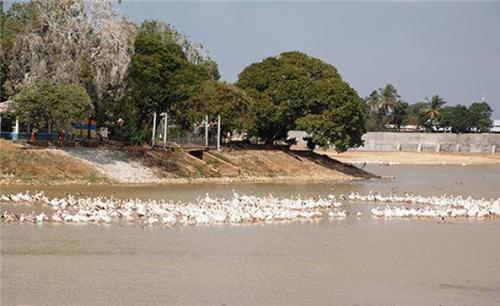 You can visit the Rajendra Garden in the middle of the Hamirsar Lake or go for a tranquil boat ride in the lake. If you want you and your family can enjoy for some time by feeding the ducks and taking pictures alongside this picturesque lake.

No visit to Bhuj can be complete without a shopping spree as Bhuj is known for its amazing collection of textiles, handicrafts, handlooms and jewellery. The Saraf Bazaar or the old vegetable market of Bhuj is famous in its own right as it used to be a British Garisson in the pre independence era. This is a wonderful place for photography and you can really get some authentic shots of the culture of Bhuj here. There are rows and rows of vendors selling wooden bangles, mirror work cholis, block printed textiles and beautiful pottery pieces on the roadside. Bargaining skills are essential if you want to drive a good deal. Visit the farsan and nashto shops for buying up some packets of khakhra, fefra, dhokla and dry kachori. Sip on some masala chai and okra pakora at Kendalji & Sons in the middle of Saraf Bazaar.

You must par a visit to the silversmith gali of Saraf Bazaar to see authentic tribal silver jewellery. Bhuj is the biggest center for production of silver jewellery and there are chances of you falling in love with a necklace or a silver kamarbandh in the Saraf Bazaar of Bhuj.

Bhuj is not a town which has a happening night life so the city markets will close down by 8.30-9.00 P.M. Its time for you to rest now and either you can drive away from Bhuj to your next destination or decide to stay in Bhuj for an overnight stop over. Hotel Oasis, Hotel Prince are some of the good hotels in Bhuj Station Road if you want to catch the train. For those of you who want to stay near the airport the Hotel Seven Sky is a good option. You can have your delicious dinner at the hotel itself. Make sure you have a peaceful sleep at night so that you wake up refreshed the next day.