The Aina Mahal or the Palace of Mirrors has always been on the to-visit list of true history lovers and knowledgeable travelers. The rich history of the palace of mirrors or the Aina Mahal is the stuff of legends. A visit to Bhuj is incomplete without a guided tour of the Aina Mahal. The architecture in itself is breathtaking as an example of the Indo- European style though the palace has been badly damaged post the earthquake which happened in 2001. 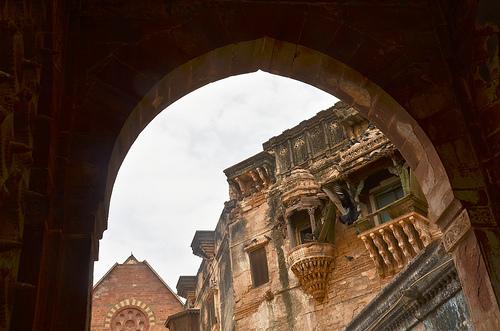 Subsequently restorative and reconstruction work took place by the initiative of Gujarat Government and the place was declared as a museum. Here is all the information about the Aina Mahal that will help you again a proper understanding of its importance.

The Aina Mahal palace was constructed during the rule of the flamboyant historical figure Mharao Lakhpatji in the mid 18th century. The artisan was expert craftsman Ramsinh Malan who had undergone 17 years of intensive training in European Architecture in various cities of Europe and Holland.

He had learnt a great deal about the arts of clock making, fabrication, cannon making, tile making and gilded architecture. After coming back to India Ramsinh Malan was not satisfied by the mediocre quality of work offered to him as he thought that these offers did not do justice to his potential. He then approached Lakhpatji (1707-1761) who presided at the royal court of Bhuj and asked him for work which would do justice to him as a master craftsman. Lakhpatji commissioned the Aina Mahal to him. 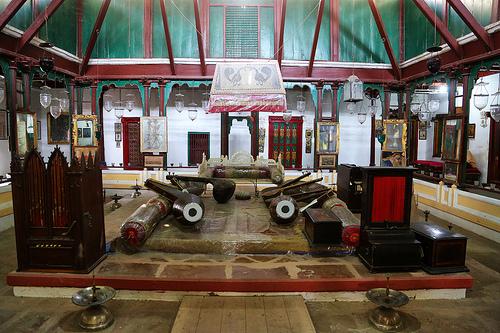 Ramsinh Malam designed the Aina Mahal in the Indo-European style with the help of Gaidher Devshi (a local craftsman) and he took great pains in sourcing the material for the palace locally. In fact there were multiple factories established locally for supplying the materials for the construction of this magnificent palace. The glass factory at Mandvi and China tiles Factory at Bhuj were all established by Ramsinh.

Canons were forged in an iron foundry and the craftsman was insistent on handling each detail and working on all the intricate artisan work himself. Ramsinh Malan believed ardently in the Swadeshi principles of Gandhiji and this is evident in the way he worked without the aid of machines and relied on locally manufactured materials. The fountains, intricate mirror work and the glass artistry were all accomplished single handedly by Ramsinh with minimum mechanical intervention.

The Aina Mahal was the realization of the dream of Maharao Lakhpatji who was a big patron of fine art, architecture and literature. Lakhpatji had wanted to stun the world with a marvelous architectural creation and he achieved his dream with the cooperation of Ramsinh and the Kutchi local architectural community. The Aina Mahal is 2500 feet long and 2000 feet wide. 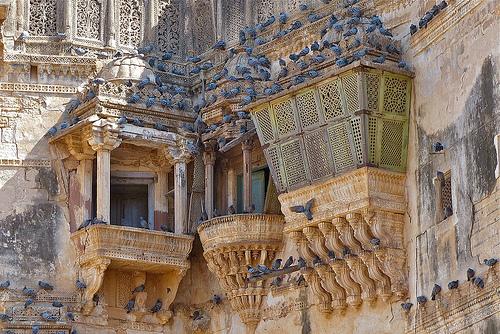 The Aina Mahal is situated in the fort complex and has the hall of mirrors as its principal attraction. The other notable parts are the Darbar hall and the royal suites. The hall of Mirrors has pristine white marbled walls covered with thousands of glittering mirrors, gilded ornaments and intricate designs. There is a huge pendant candelabra built in the Indo-European style while shades of differently colored Venetian glass surrounding it light up the enormous hall.

A series of fountains positioned inside a large pool (known as Pleasure Pool) is situated around Aina Mahal. The engineering plan made by Ramsinh was far ahead of his time as there were pumps and siphons which raised the water from the ground level to the pleasure pool along with the other fountains surrounding it. The fountains were designed to make the water spray around in a variety of patterns in a manner which charmed the onlookers. 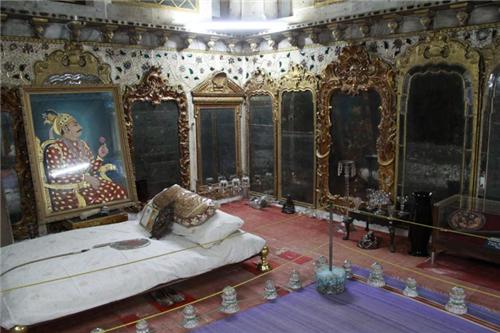 There is a small and gorgeously decorated state apartment with a carpeted floor upon which stands the erstwhile bed of Maharao Lakhpatji. The hall in the apartment contains a superb collection of artwork accomplished by Ramsinh. There is a Dutch clock which is believed to be one of the earliest specimens of Dutch clocks in India. There are a couple of French and English celestial globes along with valuable antique toys. Intricately engineered toys which performed certain functions were also the part of the collection.

The historical significance and the uniqueness of the Aina Mahal have made the Gujarat government declare it as a heritage site long ago. Now it has been converted into a historically important monument which hosts the museum called Maharao Madansinhji museum. This museum holds a lot of paintings, Kutch tribal handiwork samples and photos of the royal family. Historians will be interested to know of the 15m long scroll that contains an accurate description of the royal procession of Maharao Shri Pragmalji Bahadur.

There is also an art gallery inside Aina mahal which contains lots of photographs of the historically significant town of Bhuj.

Guide to the Aina Mahal

As with other historically significant places it is advised to take a guided tour of the Aina Mahal. Make sure you arrive with some time on hand. The compound outside Aina Mahal has many structures of architectural and aesthetic value so make sure you explore the whole compound and not just the building. 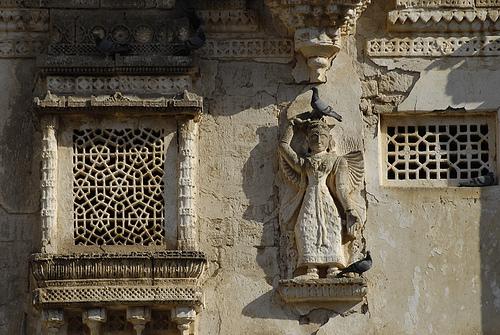 There is European style carved doorways, window boxes and hanging balconies which you can explore by walking around. Photography is not permitted inside the museum but you can click some amazing shots of the ruins and the decayed architectural splendor around the main palace.

You can easily walk from the town of Bhuj to Hamirsar Lake which is adjacent to the Aina Mahal. The main palace is at the north east corner of the lake.

The Aina Mahal is open throughout the year though there are specific entry timings. The palace remains open for public viewing during 9.00 A.M to 11.45 A.M and 3.00 P.M to 5.45 P.M

The entry fee for adults is Rs 10/- while for children under 5 years entry is free. There is a separate fee of Rs 30/- for bringing in cameras inside Aina Mahal.